» HOW WE HELP » UNITED FOR HUMAN RIGHTS

PARTNERS AND LEADERS
SUPPORT THE PROGRAM

To bring it about, for more than 40 years Churches of Scientology and their members have initiated and supported programs that effectively raise popular awareness of human rights and teach them to youth and adults.

To that end, the Youth for Human Rights PSAs and The Story of Human Rights educational film air on several hundred television stations in dozens of countries in a typical year, while partnerships to foster human rights have been formed with nearly 1,000 organizations and government agencies across 80 countries.

Through these partnerships, human rights organizations and government bodies have been supported in their mission to uplift communities and entire regions.

Further, more than
500,000
students have been empowered with human rights education,
and over
12,000
schools worldwide have implemented the Youth for Human Rights and Bringing Human Rights to Life curriculums, all made available to educators free of charge through the support of the Church of Scientology.

Hundreds of organizations and governments have joined forces with United for Human Rights and Youth for Human Rights, helping to educate tens of millions across 190 countries. Following is a sampling from those who have experienced the results.

By getting the message into the schools, you are starting off an entire generation of people who are going to ultimately make decisions long term on where human rights go from now into the 22nd and 23rd centuries. —State Representative, Florida

Human rights is not an abstraction. It is a very real thing that happens every day, that we have to defend and advance and deliver. So the everyday situations presented in the PSAs are exactly the way to communicate human rights. —Secretary, National Government, Philippines

The development of policies established by the higher command requires prevention programs in the national army. To strengthen the participation of the civilian population and international community in these programs, our battalion of the National Army has adopted the Youth for Human Rights program. The program demonstrates a simple approach to the problem, and the audiovisual support material is excellent for seminars and training in human rights of our military community. —Sergeant, Battalion Advisor, Colombia

The most effective tool for the promotion of human rights that I have seen. —Member, Legislative Council, New South Wales, Australia

I have seen your campaign for human rights. I myself have worked for human rights in different parts of the world for the last 20 years. I have seen no one else working to educate all people on their rights as you do. —Politician, Sweden

I received the human rights material and have incorporated it into a fifth-grade lesson plan on human rights. I was most impressed with all the materials and would like to thank you very much. This material enhanced what we were teaching and brought to life the importance of human rights. —Teacher, U.S.

The students were very interested. Since viewing and learning their 30 human rights, they have been questioning me about events around the world relating to human rights. The students have shown respect and empathy and the DVD provided a great learning experience. —Teacher, Canada

The DVD of Youth for Human Rights is proving to be exceptionally useful to me. It is an extremely attractive and effective educational tool. I have used it on several occasions in my school. I have used it among approximately 180 of my classes as part of their training in Life Skills education. I am using it to educate my student volunteers from classes 8, 9, 10 and 12 for my Service Learning Project, in which girls have undertaken to educate about 150 slum children of the local community. —Teacher, West Bengal, India

As a direct result of the course, supplemental videos and training materials, my students lead a community campaign on human rights education and have been able to help another nonprofit organization provide support for human rights of disabled persons. As a United States Peace Corps volunteer, I was not able to find a better program in the three years I taught in Azerbaijan. The program was used to teach more than 150 high school and college-age youth and to motivate them to be more active in human rights. —Educator, Azerbaijan

I teach social studies at an alternative school for at-risk youth. My opening unit is on human rights. This year, I folded your curriculum into the unit and it made a huge difference. I used to show them public service announcements produced about 15 years ago. The students barely connected to the images. The new videos you produced were not only viewed once, but many times by the students’ requests! The program was not just useful, but invigorated the classroom, stimulating discussion and higher-level thinking. —Teacher, U.S.

Among religious organizations and religious groups around the world, I don’t think anyone has done as much as the Church of Scientology in terms of producing the essence of what the UN Declaration of Human Rights was all about. —Dean, Graduate School, University of Texas, U.S.

The hallmark of the great achievement of Scientology is recognizing the human rights of people to the pursuit of freedom and the pursuit of happiness, and its respect for citizens around the world. —Advisor, Roosevelt Institute, U.S.

This campaign is for everybody. There is not one single viewpoint dominating the whole campaign. It is designed for all Mankind. —Commissioner, Commission for Equal Opportunity, Italy

NO PROGRAM in the WORLD has the IMPACT that the CHURCH'S HUMAN RIGHTS PROGRAM has.

No program in the world has the impact that the Church’s human rights program has. And those of us that belong to other religious organizations, regardless of what our beliefs might be, can stand with the Church, can stand with Scientologists and say “let’s change the world.” —President and Founder, Public Policy Institute, U.S.

This campaign empowers individuals to use these rights to work within their community, so they know what they can expect of other people and from their community. —United Nations Human Rights Advisor, Guyana

No other religion takes responsibility as clearly in favor of human rights as Scientology. Its publications and campaigns represent one of the best and most sincere efforts for human rights. —President, Human Rights League, Spain 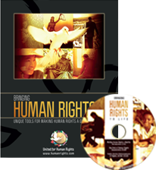